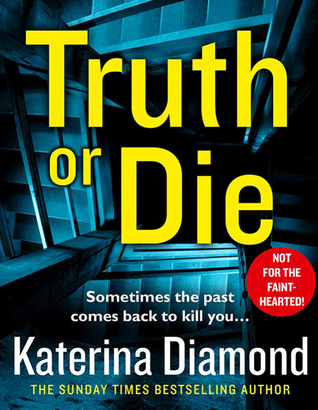 I’ve read and LOVED ‘The Teacher’ which is the first book in the DS Imogen Grey series…and then I sort of lost sight of Katerina Diamond’s writing for a few years until I joined The Fiction Cafe Book Club. Katerina is one of the authors in the group and did a fantastic live chat not so long ago talking about her books which reminded me of just how hooked I was. So I skipped ahead and read Truth Or Die (forgetting it was a series) which was published in 2019. It honestly didn’t make too much difference not having read the others as the back stories are hinted at – but I’ll definitely go back and catch up on what’s been happening in DS Grey’s life until now.

Katerina’s work can best be summed up (in my opinion) as dark, gritty, police procedurals. But they’re more than that. They have elements of romance, plenty of pathological liars, serial killers, detective mysteries, dirty cops, family drama, trauma and psychological thriller undertones all rolled into one. Truth or Die was a great example of a talented juggle of all the elements of a good book rolled into one. I can say with complete certainty that I will go and read the previous books in this series, and the most recent one (Woman in the Water) and will likely finish each one within a day – they are that addictive. Katerina doesn’t hold back. She will shock you, she will make you laugh, she’ll make you cry – be prepared to be completely hooked. Katerina Diamond is right up there on my list of favourite authors and ‘Must’ reads.

The butchered body of a professor is found in a private office of Exeter University. It is the first in a spate of horrific murders that shakes the city to its core.

Who would target a seemingly innocent man, and why? DS Imogen Grey and DS Adrian Miles turn to his students for answers, but their investigation turns up no leads. Someone must know more than they’re letting on…

As the body count rises, the police have to look into the past to uncover the person responsible before it’s too late.

But are they brave enough to face up to the truth?

Katerina is the author of the Sunday Times Best Selling Exeter based crime thriller series – starting with ‘The Teacher’ and followed by The Secret, The Angel, The Promise and Truth or Die Katerina is currently working on her seventh novel which is a standalone (The Heatwave).

Katerina currently lives in East Kent. Katerina was born in Weston-super-Mare and has lived in various places since including Greece, Cyprus, Derby, East London and Exeter. Katerina watches way too much TV.

Woman in the Water