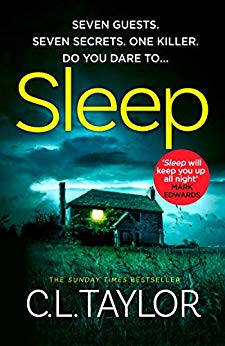 I have loved all of C.L. Taylor’s books that I’ve read so far and this one is no exception to that pattern! Taylor’s writing just gets better and better – and it was already fabulous to begin with. ‘Sleep’ is one of those books that just doesn’t quite give you the answers…until the end. It’s like a murdery mystery party – except it’s all real life and Anna is living the nightmare…

All Anna wants is to be able to sleep. But crushing insomnia, terrifying night terrors and memories of that terrible night are making it impossible. If only she didn’t feel so guilty…

To escape her past, Anna takes a job at a hotel on the remote Scottish island of Rum, but when seven guests join her, what started as a retreat from the world turns into a deadly nightmare.

Each of the guests have a secret but one of them is lying – about who they are and why they’re on the island. There’s a murderer staying in the Bay View hotel. And they’ve set their sights on Anna.

This book is completely and utterly absorbing. From the characters and the little hints at their pasts and secrets, to the scenery and the desolate starkness of the Island of Rum….Taylor paints it all in amazing clarity so that without a doubt you are living everything along with the main character as you read.

Thanks to the publishers for an advanced copy of this book – I couldn’t have waited months to read this one it was just amazing!