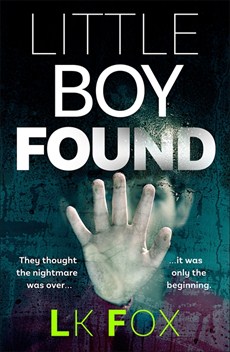 THEY THOUGHT THE NIGHTMARE WAS OVER . . . IT WAS ONLY THE BEGINNING.

It was a morning just like any other: Nick drops off his son off at the school gates like he usually does. But then he has a minor collision with another car, and this sets off a chain of events that makes Nick question EVERYTHING he thought he knew.

Be warned, this is not another missing child story. Nicks finds his son, and the truth is far more shocking.

‘Christopher Fowler is an award-winning novelist who would make a good serial killer.’ – Time Out

This is the first book written by L K Fox who usually goes by Christopher Fowler, author of the Bryant and May series. I’ve not read any of his works before now. However I’m glad I snapped up this bargain for the kindle. This isn’t your typical missing child book, and there have been a few lately haven’t there! This is a psychological thriller with added twists an just when you’re thinking nothing more could possibly be uncovered… there it is!

The story is narrated from two points of view, Nick’s and Ella’s. Nick is married to Ben and is a second father to Gabriel, Ben’s son from his first marriage. Ella is a young teenager who becomes pregnant. We follow Nick and Ella through their stories, finally finding out towards the end what binds them together so intricately. I read this quickly because I was gripped, there was no end to the descriptive bits, ups and downs and general page turners. I would definitely suggest that if you like Sophie Hannah and Paula Hawkins then this is a great read for you.

This story is brilliant, unique, clever and FULL of drama. Read it now and ignore all the spoilers!