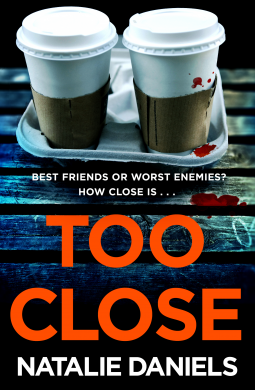 Too Close by Natalie Daniels

How close is too close?

Connie and Ness met in the park while their children played. As they talked, they realised they were neighbours. Perhaps it was only natural that they and their families would become entirely inseparable.

But when Ness’s marriage ends in a bitter divorce, she is suddenly at Connie’s house all the time. Connie doesn’t have a moment to herself, no time alone with her husband, not a second to chat to her kids.

It’s all too much. Something has to give.

Too Close is Natalie Daniels debut novel – a story of friendship, deceipt, romance, betrayal and mental illness. It’s not a thriller because it’s quite belieable and tastefully dealt with, but nevertheless it has the underlying tones of a psychological thriller in part with family drama, relationships and romance. We begin with Connie, one of the main characters, in a psychiatric unit – not completely sure how she came to be there. The story jumps between the past and present to compare her life Now with her life Then and all the bits in between that brought her to where she is in the current time.

For me, the ending was a little rushed. It’s a fast paced book moving you from scene to scene, and betrayal to betrayal and then the ending just quickly wraps it up and claims it finished. Maybe there’s room for another book in all this… and for a debut it was incredibly addictive, gripping and advanced that it is quite hard to believe it’s the authors first novel.

Here’s an interesting fact though – Natalie Daniels is the pseudonym for screenwriter, author and accress Clara Salaman – DS Claire Stanton from The Bill! Transworld Digital have published this book already in Ebook format which you can buy from Amazon for just £4.99. If you’re desperate to get your hands on a ‘real life’ copy of this book looks like you’ll have to wait until March 2019… sorry!