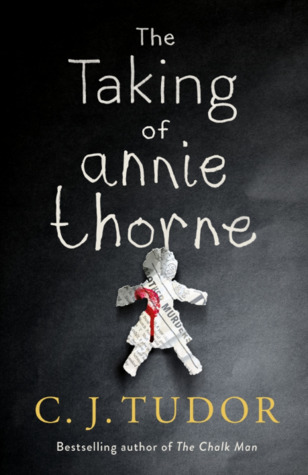 Joe never wanted to come back to Arnhill. After the way things ended with his old gang–the betrayal, the suicide, the murder–and after what happened when his sister went missing, the last thing he wanted to do was return to his hometown. But Joe doesn’t have a choice. Because judging by what was done to that poor Morton kid, what happened all those years ago to Joe’s sister is happening again. And only Joe knows who is really at fault.

If you’ve read reviews about this book and you’re wondering about the supernatural element – don’t let it put you off. Had I really known that this might have been where the book was going at times, I wouldn’t have read it because I just can’t get gripped by those sorts of storylines. However C.J Tudor has opened up a whole new world to me and I know that if you have even the tiniest doubt about delving into that sort of genre you won’t regret it by starting with this book.

That being said this book is so much more than ‘Supernatural’ in genre. It has a bit of Psychological Thriller, Drama, Mystery and Horror all rolled into one. I’ve read great things about C.J. Tudor’s first book (The Chalk Man) and definitely will be going to read that one this year now that I’ve read this.

“…when my sister was eight years old she disappeared. At the time I thought it was the worst thing in the world that could ever happen. And then she came back.”

So as well as achieving something that spans multiple genres and therefore should be attractive to many different types of readers… C.J. Tudor is a woman…and writes entirely from the point of view of a man. It’s not hard to do that – but to do it well is entirely different. Tudor completely does it well, in fact, she is the main character – utterly and completely.

My only little bit of feedback – the title. It’s boring actually and is why it took me so long to pick this out of my list of 80 books to review and actually get stuck in and read it.