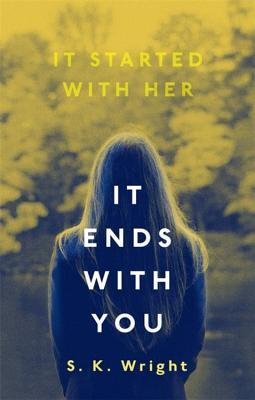 It Ends With You – S.K.Wright

“If I’d told the truth, it would have been fiction…”

So when her dead body is found in a ditch in the local woods the only thing anyone wants to know is: Who could have done this?

It has to be Luke, her boyfriend. He has the motive, the means, the opportunity and he’s no stranger to the police.

Even though the picture is incomplete, the pieces fit. But as time passes, stories change.

This is a clever book because it’s told from six narrative strands and the author doesn’t seem to slip up at all! Each narrative travels seamlessly into the next whilst we are also indulged with snippets from Eva’s diary…or are we… The questions you have throughout this book will still be there at the end!

At times I felt like some of the narratives were immature and childish in their language and attitudes. It frustrated me until I realised that it was exactly what was supposed to happen… the narratives were true to each character, giving a little or a lot through varied expression and linguistics. At times though the characters were a bit weak and lacking in depth. This is marketed as a Young Adult Thriller – I don’t think that should put off the ‘older adults’ though as it’s a book that can grip anyone.

The final chapter though… I don’t know. It didn’t sit right with me. It was rushed, and it left me with more questions. Perhaps there’s room for book two…

The author appears to have an empty back catalogue.. that’s because she’s published under her real name previously (Sam Mills) – and has had three young adult novels one of which is being adapted for film!